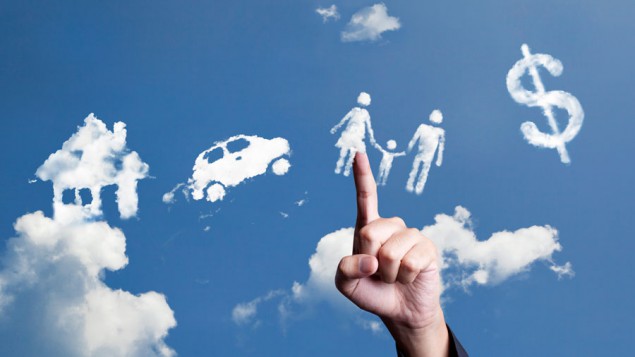 The Dream Building Virus: How and Why It Works

When I first joined an MLM in February, 1992, like you, it was all new and a little mysterious to me.

I already owned and ran two businesses so I figured I knew it all.  After a few weeks it became obvious, even to my thick head, that I had a lot to learn.

One of those things, and maybe even the most important, was the power of having a dream

Today is a great day to really explain what I call The Dream Building Virus: Dream Building How and Why It Works and Why You Better Get Into It Real Soon

It’s Sunday morning and I’m studying a course about Facebook Marketing.  I know I can make a lot more income if I get better at buying advertising.  So I’ve invested in books and online courses about Facebook Advertising. It’s not because I want to learn that stuff, in fact, I don’t even like it.  But I have some dreams which need more money for them to be fulfilled.

Allow me to give you an aside before getting into the essence of this post.  I’m here at my computer doing a course and I began thinking of some reasons why I’m doing it.  Part of my dreams is to be much fitter and healthier. So ….

It’s the first day of fasting.  That means no food at all. All we can consume is water, tea, coffee and vegetable broth.  We are shooting to go 5 days. The most I’ve gone before is 4 days. It’s the first time for Theary.  Maybe I’ll write about that some other time. If you’re interested in learning the benefits of Intermittent Fasting there’s plenty on Google and YouTube.

By the way, just so you know, the first day is the hardest, thats the hungriest you will feel.  After the first day the hunger will disappear. It’s quite astonishing. 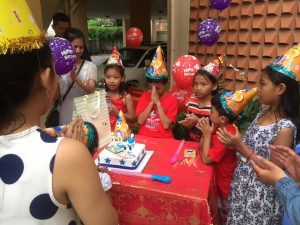 My wife, Theary is pottering around cleaning up the remnants of a kids pool party we hosted yesterday. Great time, such lovely well-behaved kids.

I would not be surprised if they are all suffering a sugar crash today though.  Normally Asian kids don’t eat much in the way of junk sugary food. They really eat mostly green leafy vegetables, rice, a little meat and fruit.  Probably why they are all slim and full of energy. Even when they are presented with western treats they are still very picky which ones they will eat.

We’re also planning a two-week vacation in China in September.  So far it looks like we will go to Hong Kong for a couple of nights then fly to Beijing to see The Great Wall and then down to Shanghai to check out the very impressive skyline.  Theary has never been to China so it’s going to be an awesome adventure. I can’t wait to make some videos while hiking The Great Wall.

Next week a good friend of mine from London is coming to visit.  Currently he is vacationing in neighbouring Vietnam. When he arrives, we will all go for a few days’ vacation by the sea. 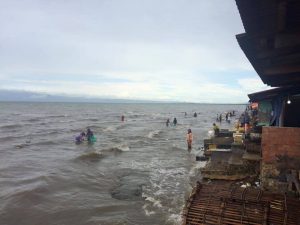 Women catching crabs at Kep. Taken from a   restaurant

We will go to Kampot, Kep and maybe even Sihanoukville.  I absolutely love the seafood at Kep and that’s saying a lot because I do not normally like seafood at all.

They have a bunch of seafood restaurants right on the water's edge.  You can sit and watch the seafood being caught and then brought to the restaurant for cooking.  How’s that for fresh! 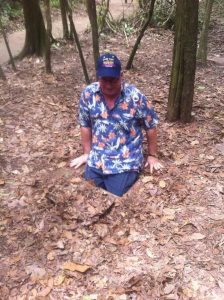 I met my friend on a bus tour in Saigon back in 2012. The tour was to Cu Chi Tunnels.  These were the huge network of tunnels used by the Viet Cong during the Vietnam War.  On a side note the Vietnamese call that war The American War.

The tunnels were used very extensively and were used for housing, hospitals, kitchens, lectures, storing weapons and ammunition and for attacking the enemy. At Cu Chi I went in one of the tunnels, which was a huge mistake as I’m quite claustrophobic and really thought I was going to have a heart attack.  My heart felt like it was going to burst through my chest. To get through the tunnel, which was multi-leveled I mostly had to duck walk and sometimes slither on my belly. For the next 7 days I could hardly walk. 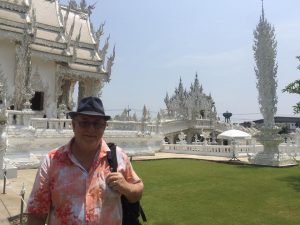 In a couple of weeks Theary is going to Bangkok with her newly pregnant sister on a shopping expedition.  Thailand is the most popular tourist destination in the world. In the first 6 months of 2017 there were 17 million tourists.  Tons of places to go with lots of interesting things to see and do. I recently posted about a road trip we did to the infamousGolden Triangle.

We’ve been to Bangkok many times and always love it, it’s such a huge, energetic, chaotic, fun metropolis. Outside of Bangkok we also love Phuket, Hua Hin, Pattaya and Chiang Mai

Ok so why am I writing all this about traveling and good times?

I’ll tell you why, because the lifestyle we enjoy was my dream.  I really internalized the dream and thought of it every day. I looked at travel sites, watched videos of amazing faraway places.  I wanted it so bad I could taste it.

Then I worked my arse off.  Simple as that. Sometimes I didn’t know if what I was doing was right or wrong but I learned that you can’t steer a parked car.  As long as you are doing the work, something will happen that makes it all worthwhile in the end.

One time I was working on building a business and no matter what I did it just didn’t take off.  Very frustrating and depressing. I just kept going and suddenly from my efforts a completely different opportunity sprang up which ending up grossing $18 Million over the following 6 years!

If you don’t have a big enough dream, you’re not going to do the work.

Building a big huge dream is so important for your future.

I had a close friend and business partner.  He and his wife used to maintain what they called a “dream book”.  It was a scrap book with lots of photos they had cut out of magazines and pasted into this book.

Before you write off this idea and laugh, let me tell you something 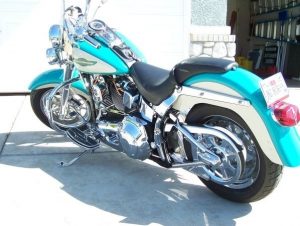 Sometimes they would show me their dream book.  One thing they had in the book was a photo of a Harley Davidson, nothing unusual about that, just it’s color.  It was a very rare, blue color that no one had seen before. Kind of a turquoise. Two years later we were discussing his upcoming birthday.  By this time, we were all doing well and I suggested we go to the Harley dealership and check out some bikes.

As we were looking through the bikes we came across one that he really liked and he took it for a test ride.  When he returned his face was flushed with excitement and joy. He bought it on the spot. A few days later it was delivered and he called it “Bliss” which was pretty sweet.

Not long after, his wife brought out the dream book and opened it to the page where he had the picture of the rare blue turquoise  …. Yep you guessed it, it was the exact same bike as he had just bought! You could have knocked us over with a feather, we were so shocked, but super pleased to see the dream book worked.

Here’s another.  While he and I were still broke and struggling to build a business we both drove crappy old cars.  His was an old Ford. On the steering wheel, he had taped a cutout of the BMW logo right in the middle.  This made his brain see the BMW logo every time he was driving. 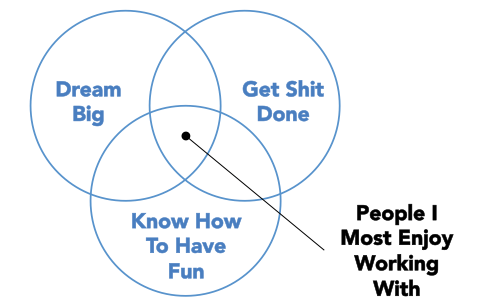 Less than a year later we bought 4 brand new BMW’s.

Once again, an absolutely true story

Spend time with your wife/husband, partner, significant other and get your heads together.  Talk about the house you want…get down to the fine details. It’s a waste of time to say things like: “oh yeah, one day we will buy a nice big house”.  That’s bullshit!

You need to see yourself in the house, you need to see its exact design, its colors , its layout, its furniture, down to the fridge, TV, giant bed, walk in robes…every detail.  Go to see display homes and walk through them take photos of each other in the houses. Really put yourselves into the dream.

Same for the car you want, what brand, model, color.  What’s the interior look like, how does it handle. Get off your backside and go to a dealer with your partner and take a test drive today.

While you’re there prospect the sales person.

I once recruited a sales guy who was working in a display home.  He went on to build a very nice size business.

You must start to experience your dream so it’s cemented into your head and your emotions and it becomes way too hard for you to live without it.

Take your downline to a car dealership, put them in the seat of their dream car.  Get some brochures so they can take it home and look at it some more. Take some photos of them in the drivers seat!

Spread the dream building virus to all your group. Leaders are Dreamers!

Hold dream sessions, get people fired up and motivated to do the work.  This is what being a leader is all about. Start making the business fun, exciting and interesting for you and your group. Yes, of course there is still work to do, but if you want to keep people from quitting make their dream too real, too emotional for them to quit. 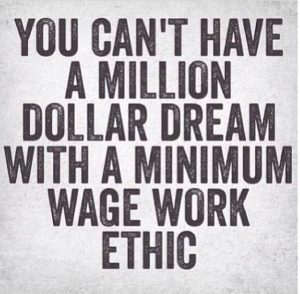 Teach your downline leaders to do the same with their group.  This is how you will get a fast-growing group who are really excited, really motivated.

Being fired up by an internalized dream makes it much easier for the work to be done.  Much easier for couples to support and encourage each other. Yes, the work! The work still has to be done, there is no way around it and no need to even look for a way around it.  Just accept it and do it. It’s like ripping a band aid off, you can do it fast and get it over and done with or you can do it slow and endure a lot of pain for a longer period of time.  That’s your choice.

I’m lazy so I would prefer to get it done fast so I can get to the beaches and other places around the world I want to see.  What’s your biggest dream? Love you to share with me in the comments below. Share this post with your business associates, it’s really going to help you all move forward faster if you want to do that.

Treat dream building as a wonderful, helpful virus which will help keep people from becoming discouraged and quitting.  Do it constantly, every single time you speak with someone in your downline, get to dream building with them and encourage them to do the same.  Let the dream building virus work for you and your group.

If you enjoyed this article, please consider sharing it with your friends and associates.  It’s very helpful to us and maybe can help change a life

Don Reid, an experienced MLM builder and Entrepreneur, he founded Apache Leads in 2003. Born in Australia, Don currently lives in Cambodia, when he is not traveling on his many adventures around the world

Home Business Leads – How Do You Know You Are Getting Quality Leads?

Home Business Leads – How Do You Know You Are Getting Quality Leads?